ERIC CLEMENT: A Tribute by CMan 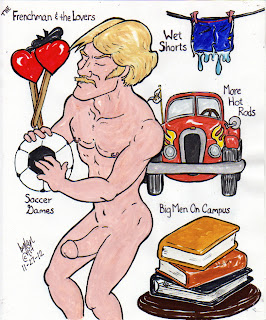 Anybody out there remember porn star uber-bottom ERIC CLEMENT ?! He starred in a number of loops in the late 70's & early '80s, as well as a few feature length titles ! He was never a headliner, though given the consistently Hot Performances he turned in, he really should have been ! He possessed a cute face, nice build, nice dick, blonde hair & mustached, along with a kind of puppy dog persona that was completely winning to me. Plus, he also had a Pair o' Gorgeous, Rounded, Bouncy Buttocks that were pre-Destined to receive Cocks & Lots of 'Em, too !
One of his best scenes & my personal favorite, is from the loop film WET SHORTS, which pairs him with JW King, as a contractor who's been hired by Clement. Eric wants to pour over blueprints, but JW prefers instead to pour, spill & spurt his cum over Eric's ass, after a serious fucking !
In a second scene from the same movie, Eric is a squatter discovered trespassing by pals JW King & RJ Reynolds. Once again, Clement gets fucked, but this time the lucky duck gets double teamed by both King & Reynolds !
Besides WET SHORTS, the Eric Clement films of which I'm familiar are
MORE HOT RODS, with Eric getting fucked by Todd Russell amidst some abandoned Packard automobiles, SOCCER GAMES, as a fellow team-mate who's topped by Ty Arthur, BIG MEN ON CAMPUS, again co-starring with JW King & RJ Reynolds, but this time Clement plays a pledge who's coerced & masterfully fucked by frat brother Duff Paxton & The FRENCHMAN & The LOVERS, as Bob Blount's former boyfriend from France, who's up to no good !
In my opinion, Eric Clement is one of the un-sung superstars of Gay Porn's Classic Era  & so, well....I'm singin' him ! He's certainly on par with the likes of such mega-bottoms as Derek Cameron, Joey Stefano, Stonie or Steve Rambo ! Now, despite how this reads, this is not an ad ! However, I believe all the afore mention'd film titles are available through Bijou Video, so, if you aren't familiar with Eric Clement's work, I'd most definitely recommend checking him out sometime ! You won't be sorry & I guaran-DAMN-tee ya, you won't be soft, neither ! ;-)
...............................
Check out   BMD2  &  HEAD COUNT, too ! 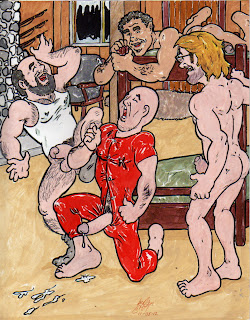 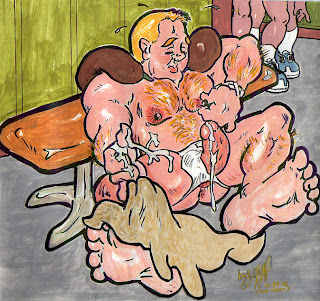 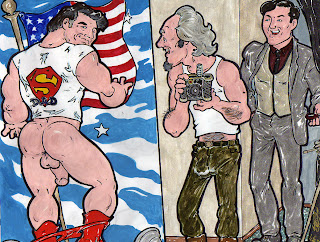 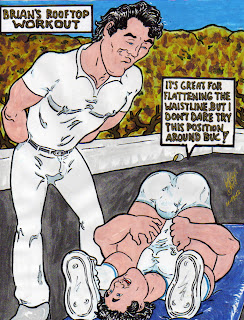 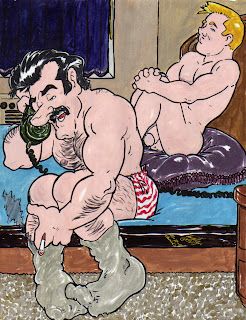